One of the indicators on the car started acting up. It was flickering on and off really fast - usually an indication of some sort of malfunction.

Peter checked it out, and sure enough one of the rear indicator bulbs had blown. He went down to buy a new one.

The man serving him gave him a funny sideways look. "Are you a resident of Toowoomba?" he asked.

Peter assured him that he was, adding however that he had not lived here long.

The man commented that Toowoomba residents come into the shop for many things, but NEVER to fix an indicator ... because, after all, they just never use them.

Come to think of it, as we drove around Toowoomba, we realised he was right.
Posted by Ruth 1 comment:

Not enough Woomba after all

Well apparently there was not enough woomba after all.

Despite Toowoomba's beautiful cool weather, the delightful tree-lined hilly streets, and the overwhelming friendliness of the Toowoomba people ... we are leaving.

With only one 3-day-a-week casual job between us (and that has finished now), we realised we have to look farther afield.

Jobs would be easier to find if we both had Masters Degrees. So we are going back to study.

We went down to Brisbane for the weekend, and had a little look around at the QUT campus (at Kelvin Grove). 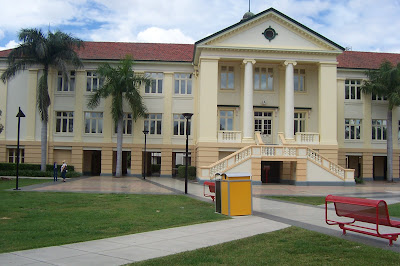 This is the Education building - quite magnificent, ay.

The whole campus is unbelievably hilly, with lots of stairs - and in the middle section there is actually a large lift making it possible for anyone to reach the buildings at the top. 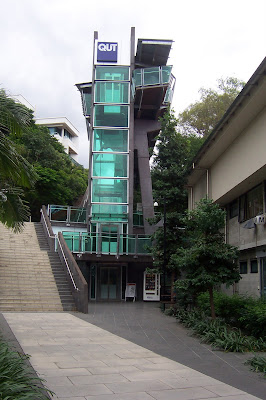 So we stayed for the weekend at the Heritage listed old Brisbane Manor Hotel in Gregory Terrace. 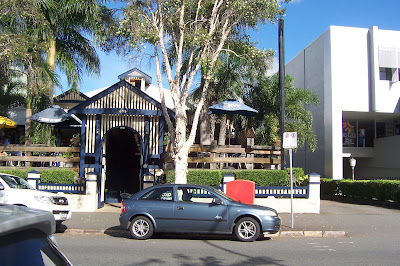 This magnificant old building is now a mostly backpackers style hotel (nice and cheap), but the room we were in was a kind of basement/dungeon. 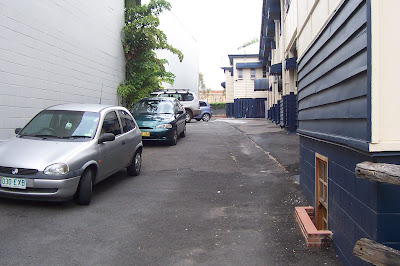 That is our bedroom window half buried in the ground on the right. And that is our door - green leafy and quite pleasant. 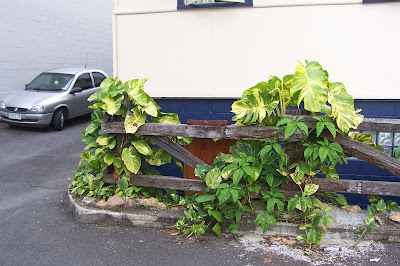 Just down the road a few metres is this busy intersection. 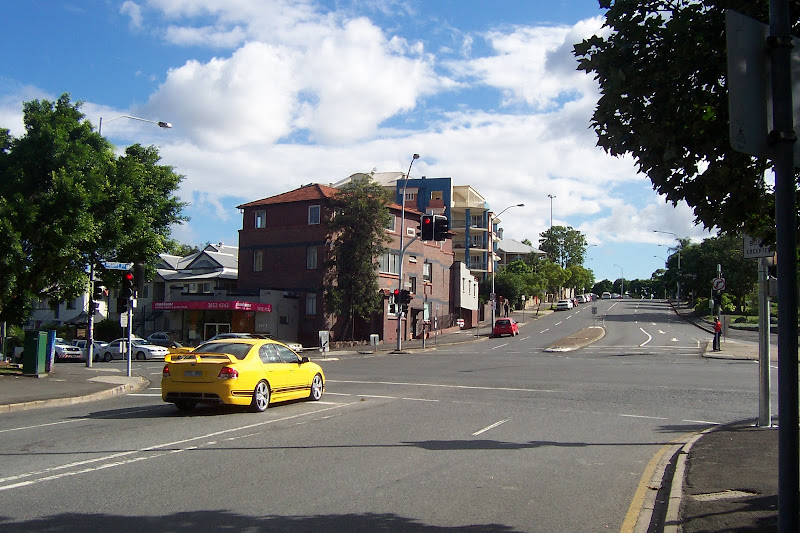 And in that brown block of flats on the corner is our new apartment. 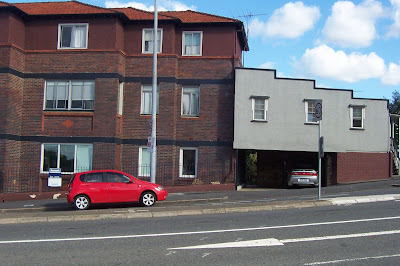 Those three windows at the top right are ours, and that is also our car hole under the grey building.

It is a walkable distance from QUT where we plan to do our Masters (starting in July), or a short walk from bus stops to get there.

It is also a 10 minute walk from Brunswick St mall, and China Town, and busy Wickham St. 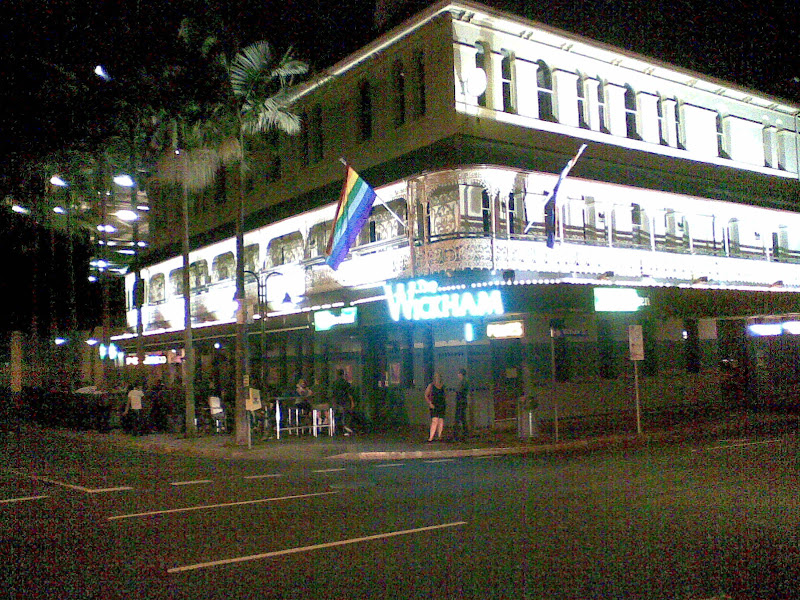 We had to stop and take a photo of THE WICKHAM!
Posted by Ruth No comments:

We came to Toowoomba looking for work, believing that there could be jobs for both of us at "SQIT" (South Queensland Institute of TAFE) or even USQ (University of South Queensland), both of which are in Toowoomba. As Toowoomba recieves a lot of refugees and immigrants, there are lots of opportunities to teach English as a Second Language (ESL).

Or so we thought.

Somehow it didn't work out quite like that. But at least I got a part time casual job at SQIT, teaching English to refugees and migrants at Gatton, some 36km from Toowoomba, at the bottom of the "Range". Three days a week I drive a SQIT car down to Gatton and back. 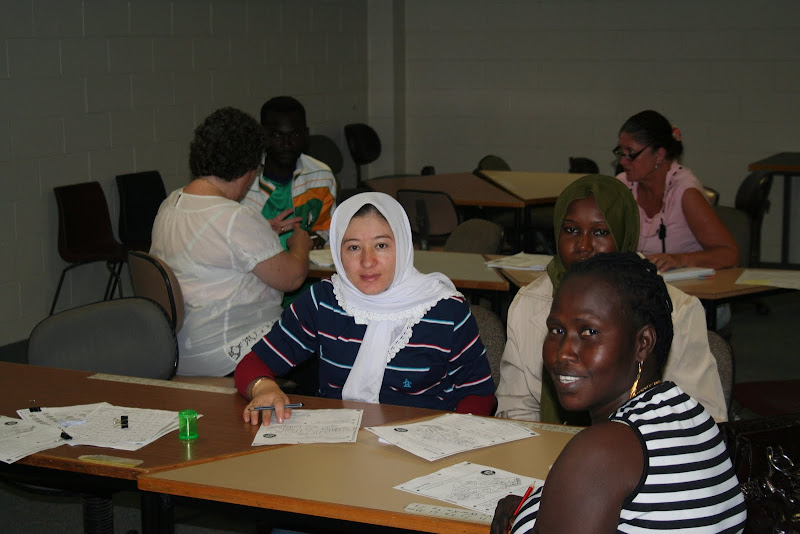 It is a multi-cultural, multi-level class, really hard work! 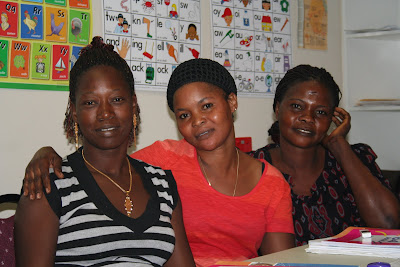 Many of my students are refugees from Sudan, and have never attended school even in their own language, so they have the unenviable task of learning English and becoming literate at the same time. 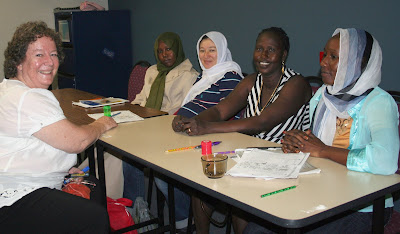 They are pretty special people, though, and it has been a valuable experience for me.
Posted by Ruth No comments:

We went and visited the Cooby Dam, just to see how bad the situation is. 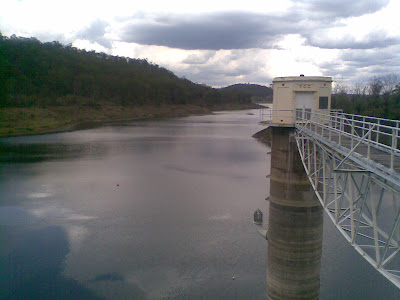 Yup, seriously not much water there!

And then the rain really got serious.

Most people here have their own rain guage, and when they meet they all discuss how much was in theirs last night. 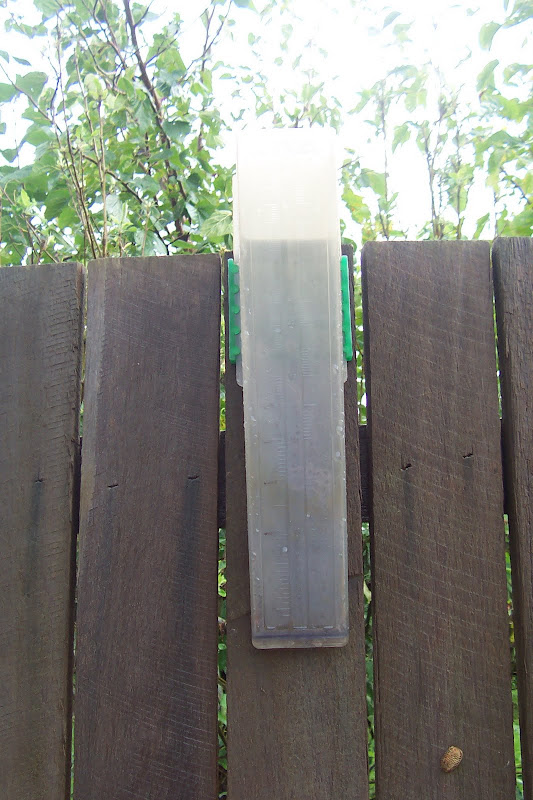 We have one in our back yard. And that was one night of rain.
Posted by Ruth No comments:

We took a bit of a ride around the Rim, while Alison was still with us. 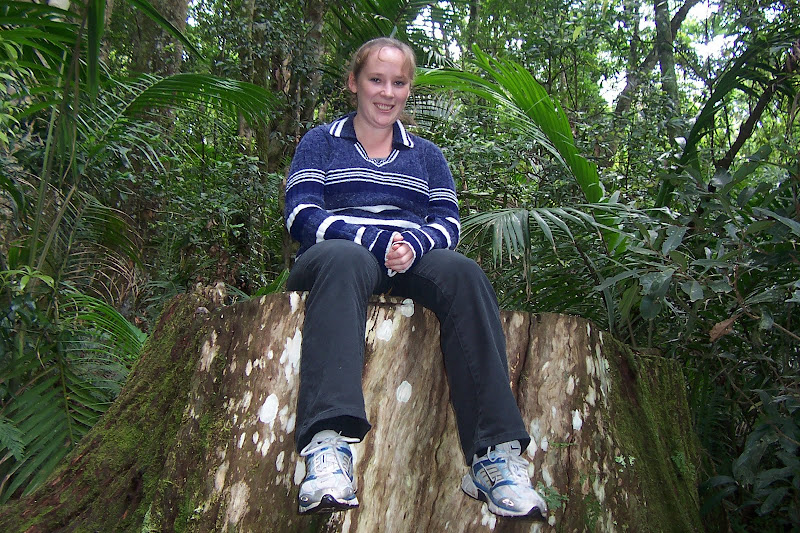 There was a lot of lovely scenery to view through the car windows, but at one stage we decided to get out at a rest area, and hike up to alookout through a little bit of rainforesty bush. 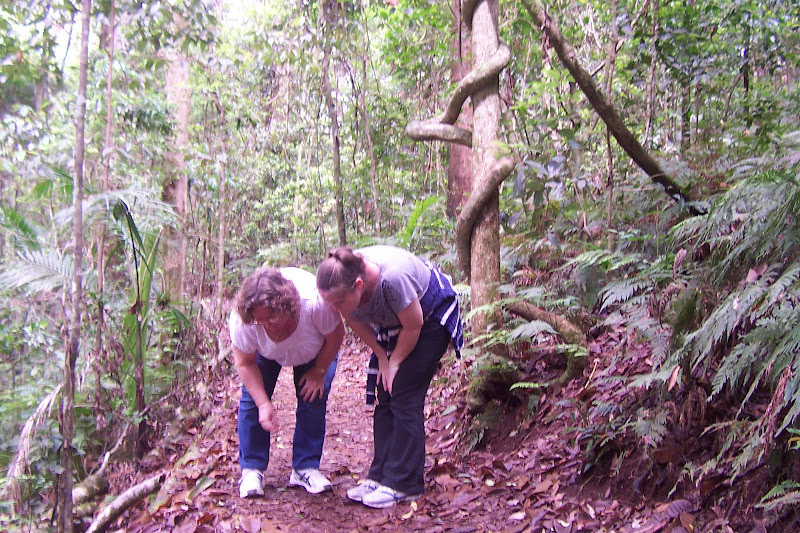 We saw lots of creatures and buggies, and even felt relatively intrepid.

As we climbed back down the hill towards our car, we could hear voices, and hoped that no one was stealing or vandalising our vehicle. When we got there we were surprised to find the little car park jammed with cars, and a long line of vehicles at a standstill in the road, which was blocked by a police car. Apparently a little further down the road (which was a fairly steep hill) a truck had got into difficulty and slid off the road or something, and the police were holding up the traffic until it was all cleared.

After that we went up Mount Tambourine, to enjoy the views. 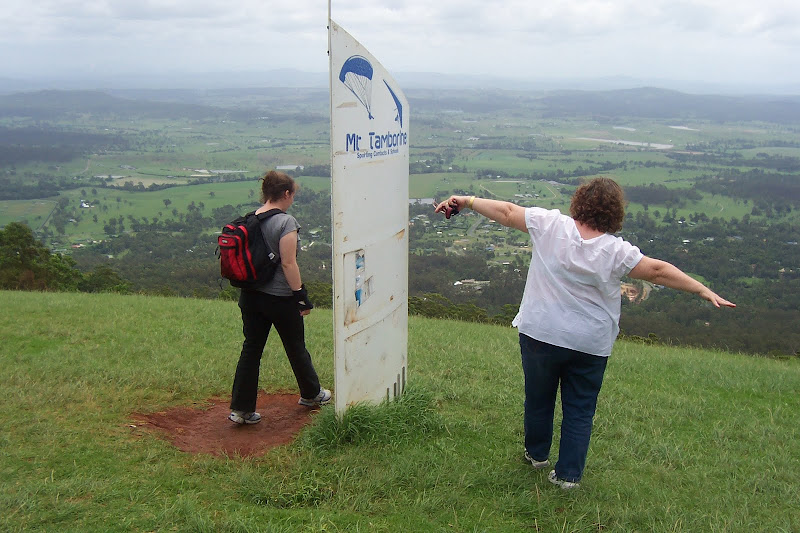 This is a jumping off place for crazy hang-gliders and the like.

Then we drove on down to visit an old friend down near Surfers, and stayed the night.

Ali went for a bit of a swim at "Surfers" - Burleigh Head - and found it very strange swimming in the crowd between the flags - after the freedom of Rockingham beaches where your safety is your own responsibility.
Posted by Ruth No comments:

We discovered the joys of Wii when we were in Riyadh, KSA, and going outside for fun and recreation was usually out of the question. We bought Wii Sports, and Wii Fit, and had extra fun with our friends Sally and Wayne playing 4-handed tennis and when they visited us with their controllers as well.

So now in Queensland, wanting to keep playing, and we bought a Wii Fit Plus ... BUT it wouldn't play! We never thought they would have "regions" for Wii games like for DVDs! (We basically defeated the regions issue with DVDs by getting a PS3 that will play anything.)

Peter searched the net and went all over Toowoomba trying to get our Wii console unlocked, or get a "mod" (modification) chip, or whatever. 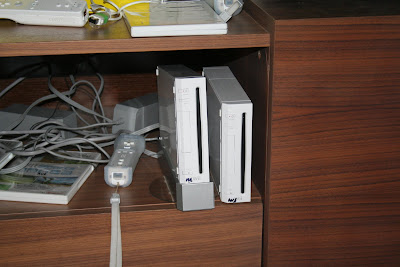 No luck with that, instead we have ended up with 2 Wiis! One runs the Middle Eastern games, the other runs the games we buy here.

A walk in the park

Just down the road from us here, right near the middle of the city, is Queen's Park - and what a delightful place it is. 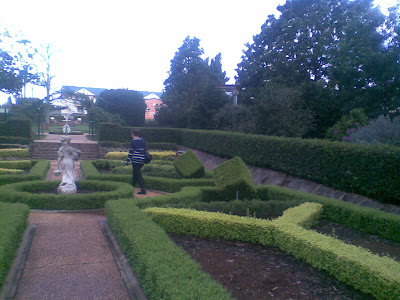 We went for a walk in the park with Ali in the evening, and enjoyed the interesting plants and trees. 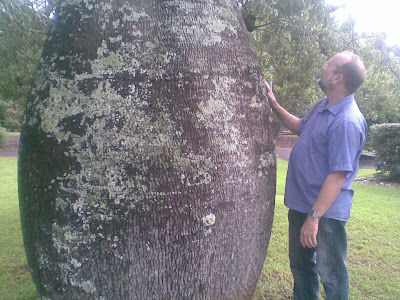 One section of the park has a lot of interesting play equipment. 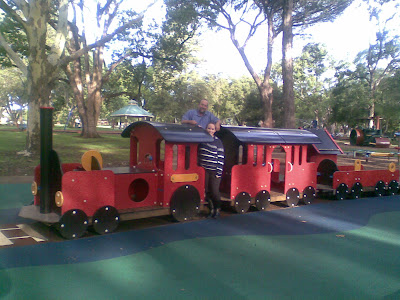 Great place to bring the kids! But not all of the items were child-sized, some could be used by adults, and some were definitely adults only. 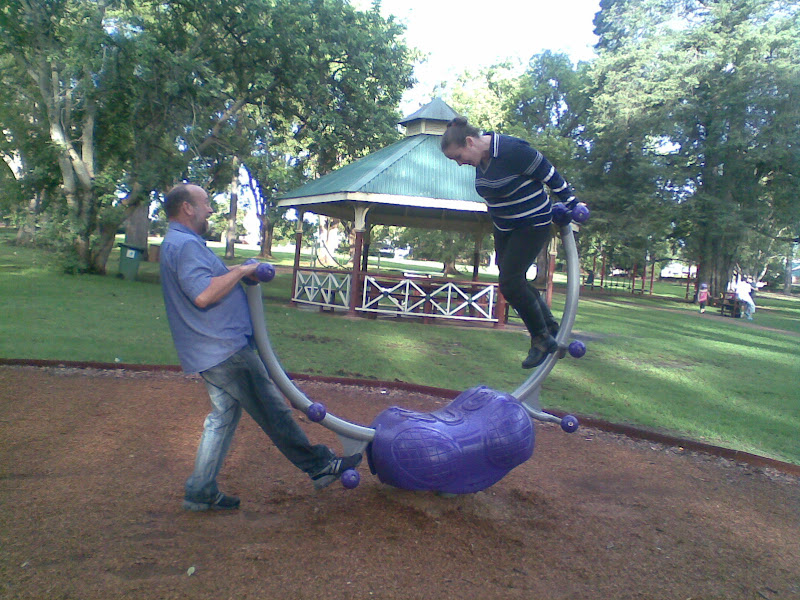 (Unfortunately it was getting dark and I didn't get photo's of the more interesting ones, this time.)
Posted by Ruth No comments:

All kids love climbing trees! And they seem to be less and less common - maybe health and safety and all that.
But the LYH has a climbing tree in the front yard. 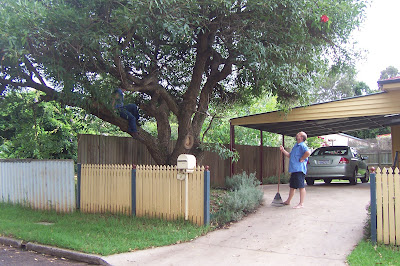 Of course it's never as easy as it looks ... and Ali soon discovered that a T-shirt is not the best attire for coming back down.

That was easily fixed, and she returned for a second go (this time without parents watching and 'helping'! 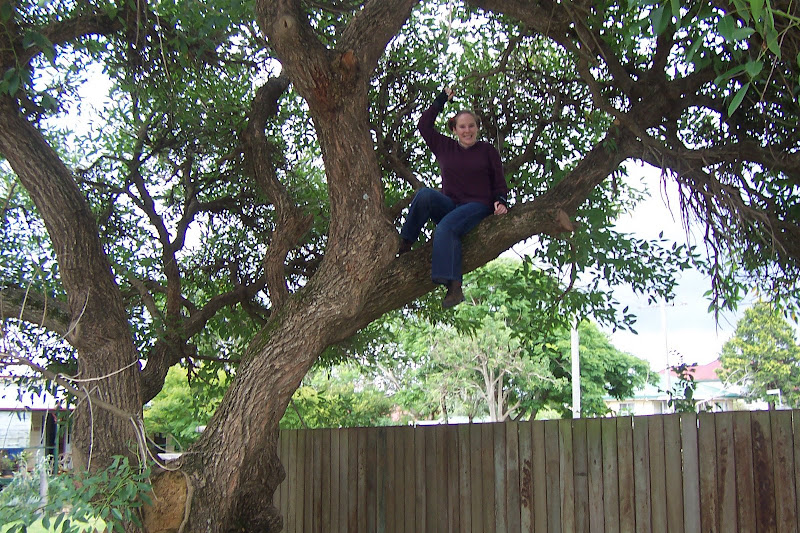 Our LYH is only a 3-bedroom cottage, but it's open plan and has a bright, spacious feel. Over the Christmas break we not only had Ali visiting, but also James and Lisa and Jakob and Cooper. 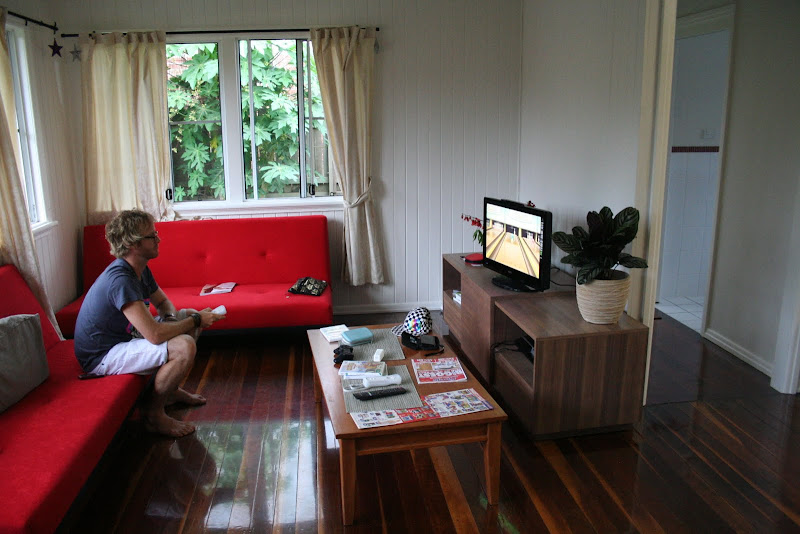 These little red futons are very light and rest on flimsy plastic legs, but at a pinch they are fine to sleep on for a night.

We have been working on becoming Queenslanders (again - we were in this state for the '80's of course.) 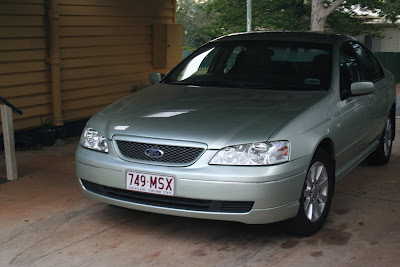 We are now less noticable on the roads as the car is sporting Queensland plates. (Not nearly as interesting as having WA plates!)
Posted by Ruth No comments:

Ruth
I am officially retired and staying put in a quiet suburb near the beach, after living in the Torres Strait in the '80s (A MERry Life), 2 years in China (Howling Pigeons of LongHu), a year in Turkey (Turklish Adventure), working in the UK (The British Job, and Porridge in Norwich), working in Saudi Arabia (Howdi Saudi), holidays around the Pacific (Not Riyadh), working in Queensland (How woomba is TOOwoomba, and Brisbane Master Class), and working in Malaysia (For we are jolly good fellows).